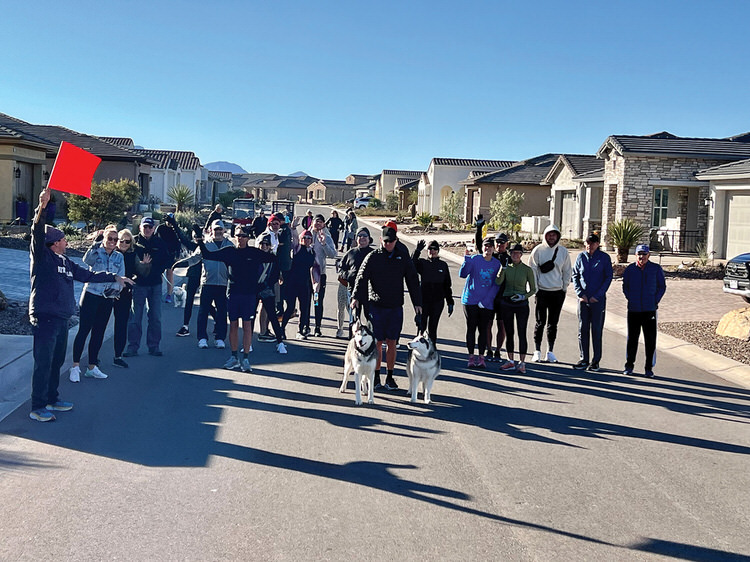 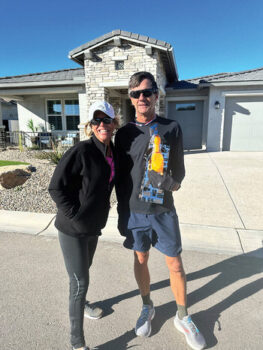 It was a cold and windy Thanksgiving morning as a bundled up crowd began to gather in Unit 6. Neighbors began to arrive, along with family, friends, and several canine companions. Why would someone do this? It’s a holiday. It’s too cold. We should be helping the cook. What’s a turkey trot?

At precisely 9 a.m., Dave Muck counted down the clock, the flag came down, and the 5K walkers and runners began their wintery trek to the dog park and then back to the neighborhood. At the halfway point, which happened to be the dog park, a smiling Karen Handschy supplied and handed out tissues, water, power bars, bananas, and a dog bowl filled with water. Karen happened to mention that the tissues were the hot commodity. Bless you!

As the runners and walkers approached the finish line, their times were called out, and the crowd cheered. There were humorous prizes handed out and provided by Elizabeth Mastro, awarded to the fastest male and the fastest female to finish the 5K. The proud winners were awarded rubber chickens! Now the crowd was really envious. We expect this fun event to grow even larger next year. Special thanks to the coordinators, Elizabeth Mastro, Katie and Marc Lundgren, Dave Muck, and Jeff Pricco, who was our sweep and manned the safety golf cart. Thanks to all the participants! Hope you all had a great Thanksgiving.