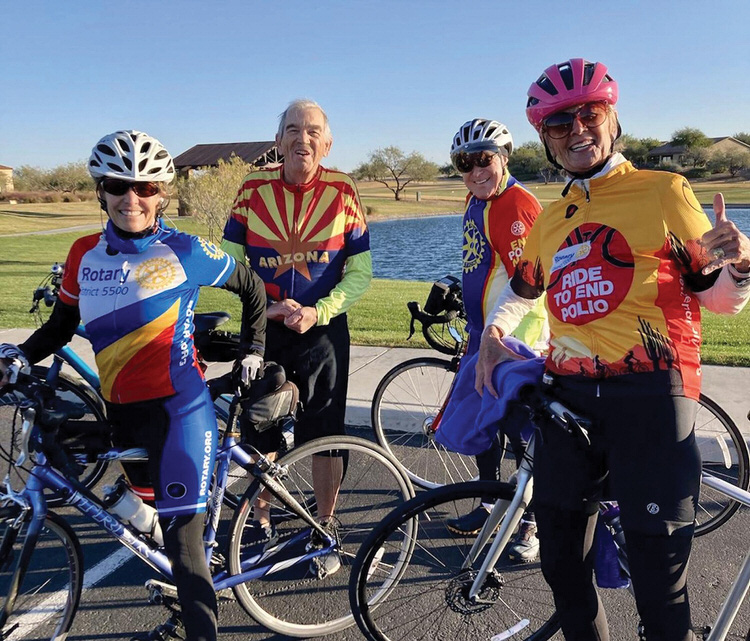 Some rode 10 mile laps around the SaddleBrooke Ranch. Others accumulated miles in a SaddleBrooke fitness center. Still others counted miles on their stationary bikes at home. Then there were those who actually biked in El Tour de Tucson. All together, they raised $28,650 to help Rotary International eradicate polio from the face of this Earth. This ride is held in connection with El Tour de Tucson. Each year members of our club have had so much fun with this event. The Ride to End Polio isn’t just a Tucson event—this ride is international!

Annually, Rotarians from around the United States and the world meet in Tucson for El Tour de Tucson. Imagine the tourism income for this area! This event is the largest Rotary International fundraiser in the world as we continue to fight polio.

President-elect John Oszust was our champion for this important fundraiser. John actually rode in El Tour de Tucson and finished the 102 miles in 4 minutes faster than last year. John arranged for another fundraising battle between two Rotary Clubs. The Rotary Clubs of SaddleBrooke, Arizona and Hanalei Bay, Hawaii combined efforts. The goal this year was to raise $15,000 for Rotary’s fight against polio.

In 1985 Rotary International began its mission to eradicate polio worldwide. Rotarians raised funds and sent volunteers to administer drops worldwide. By 2021, Rotary International had eliminated polio throughout the world except for two countries. However, this horribly disfiguring and crippling disease has now been found back in North America! It’s more important than ever to extinguish it from the planet. Please help our fight.

To tell you a little more about the Rotary story, Rotary is the world’s first service organization. Today, Rotary has grown to be the world’s largest volunteer organization. Rotarians can be found in more countries than the Red Cross, Starbucks, or even McDonald’s.

The Rotary Club of SaddleBrooke is not only an award-winning organization devoted to making a difference locally and globally, it is also a club that enjoys coming together for lunch and lifelong learning. We currently meet weekly at the Ranch House Brewery and Grill at SaddleBrooke Ranch for weekly programs. Plus, we enjoy getting together for social events and service projects. We have fun making a difference.

The Rotary Club of SaddleBrooke is open to anyone who is living or working in SaddleBrooke, SaddleBrooke Ranch, Oracle, Catalina, Oro Valley, and all surrounding communities. For more information, contact Wendy Guyton at 520-404-5712 or [email protected]

Sunrise Rotary at the Tucson Marathon 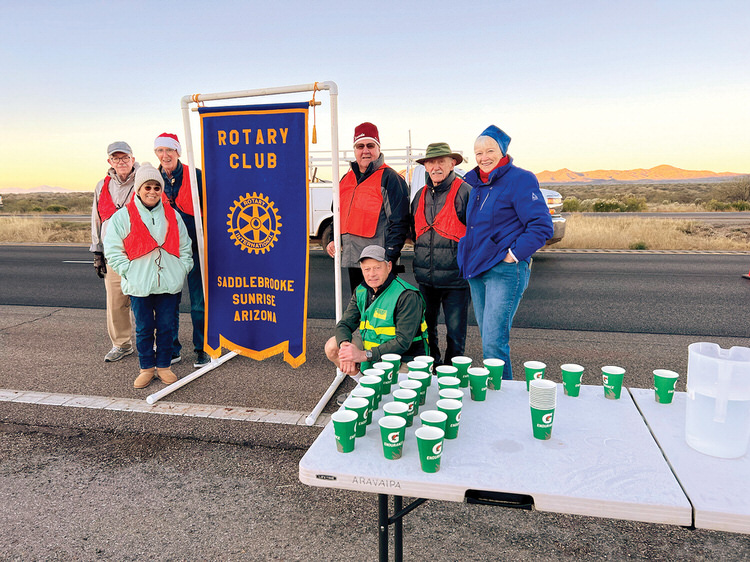 Members of the SaddleBrooke Sunrise Rotary (SSR) were in action at this year’s Tucson Marathon. Not only did the members man one of the water stations along the route, they also participated in the marathon.

Thinking about giving back? Do it while having fun. Become a member of our Rotary or find out how you can assist this service-based club. Contact Frank Shipton at 805-279-2966.

Happy New Year from all the members of the SaddleBrooke Sunrise Rotary Club. Join with us in 2023 to help serve those in need. Contact Frank Shipton at 805-279-2966.