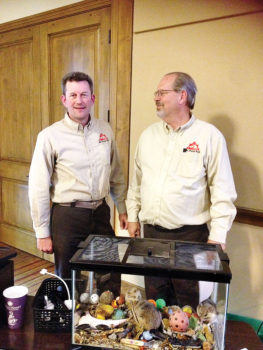 Kris Brown, aka Mr. Pack Rat, had important information for SaddleBrooke Ranch residents during his recent stop at the Thursday Talks Series in La Hacienda Club. Rather than considering the pack rat as just another rodent that should be gotten rid of with poison, he emphasized that the pack rat is an important part of the food chain for owls, hawks, coyotes, snakes, bob cats and even road runners.

As explained by Kris and his assistant, Eric Bell, what we call a pack rat is actually a white-throated wood rat and is native to North America. Our pack rat is different from the Asian rats which live around people and often depend on human garbage to survive. Our pack rat is a non-aggressive passive nocturnal creature which prefers to live mainly a solitary life. Here in the desert, it historically prefers to eat cactus and mesquite beans. It is not known to attack or bite unless provoked and will scurry away if it senses a human. An adult pack rat can grow to 15 inches long and weigh up to one pound. But an average size pack rat is closer to 12 inches long and less than a pound. Dark gray-brown with a lighter color underbelly, the pack rat is often mistaken for a ground squirrel or other animal. Kris brought a couple of these small creatures which were contained in an aquarium for everyone to see.

An important fact in dealing with the pack rat is that it must have shelter since it cannot survive when exposed to extreme heat, cold or direct sunlight. Building a nest is not just a pleasant pastime for the pack rat; it builds a nest in order to survive the elements. Favorite nesting locations include cacti, trees, rock crevices, pool heaters, spas, car engines and gas grills. The nest is composed of twigs and is fortified with rocks, cactus, sticks, dog droppings and just about anything else available. It especially loves shiny objects and often brings those into the nest. The size of the nest indicates the hierarchy of pack rats with the most dominant living in the biggest and best nests. The nests are reused again and again by the latest generation of pack rat. The pack rat is a true wild animal and lives alongside other wild creatures including snakes – that is, until the snake gets hungry.

Pack rats have a life span of about two years. Two to three young are produced every six-eight weeks and the females are sexually mature in six weeks. Being avid chewers, their teeth never stop growing. The pack rat has been known to chew through wires in cars, attics, spas and pool heaters. As some residents have found, the pack rat also likes seat cushions. While most animals prefer to avoid homes, the pack rat is curious and will investigate anything new in its environment especially a new home.

Rat poison is dangerous yet ineffective for the immediate killing of the pack rat – rather, it makes them sick, weak and vulnerable to predators. The pack rat is likely to be eaten before it dies of the poison. Since the pack rat is a part of the food chain, if a predator eats a poisoned sick pack rat, then that predator will likely die.

According to Mr. Pack Rat, the solution to eliminating and/or avoiding pack rat issues is to create and maintain a buffer zone around your home. Get rid of existing nests and nesting opportunities within 30-40 feet of your home. Trim low hanging branches and keep at least eight-inches between objects and walls. Also plug openings to air conditioners. Things that don’t work in keeping pack rats away are dryer sheets, moth balls, peppermint oil, blinking lights and Irish Spring soap. The only thing that works is open space. Another method of dealing with pack rats often employed by Mr. Pack Rat is to capture the creature and dispose of it humanely. Finding out there are options for dealing with pack rats other than poison was a relief to many of the SBR homeowners who attended the session.

Thank you, Kris Brown, for educating us about our little neighbors.