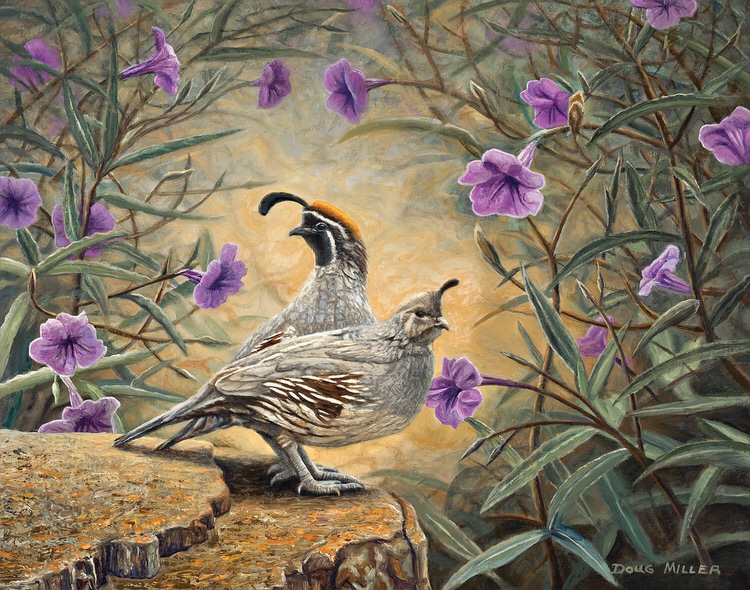 Two for the Road by Doug Miller 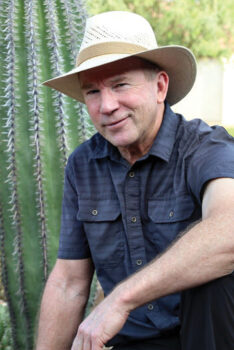 Doug Miller began his painting career more than 40 years ago, painting hard-edge abstracts while studying art in college. His work was featured in a senior exhibition that influenced him, along with his parents’ encouragement, to pursue an art career.

Fast forward to 2021 where Doug and his wife Barb reside in the SaddleBrooke Ranch community, moving to the Ranch in 2016. In his studio and on location, Doug paints Arizona’s desert landscapes as well as Colorado mountain scenes. You would be so impressed with his work and the feeling you receive when studying his creations. When you visit his website, you will marvel at how he has captured the amazing beauty of the mountains, desert, and its wildlife.

Doug states, “I recently camped out on the red rock cliffs overlooking Arizona’s Lake Roosevelt to paint on location. I entitled my finished painting, Above the Madding Crowd. I love the feeling of serenity when I’m painting in remote areas, away from the hubbub of the city. I am even more excited now, since I started plein air painting; capturing the actual scene with dramatic lighting, which allows me to lock in the true colors that cannot be captured with mere photographs.”

Doug was born and raised in Hesston, Kan., spending much of his early childhood exploring nature on his Grandfather Miller’s farm. He asked for a camera on his 9th birthday, giving him more reason to roam along the creek beds, lined with cottonwoods and willows, photographing creek scenes and sunsets.

After graduating from college, Doug, in search of new landscapes to paint, relocated to eastern Washington state, where his uncle was row-crop farming with a large family corporation. Doug married, farmed, and pursued his painting in the off seasons. He was able to build a home with a studio, which helped to increase his painting time. Farming allowed him to fund a trip to Europe to see the Masters. This opportunity further inspired him to pursue his art career.

Changes in Doug’s personal life served as a catalyst for his relocation to Leavenworth, Wash., a quaint tourist town, modeled after an authentic Bavarian village. “This move launched my career as a full-time artist.” In Leavenworth, he remarried, welcomed a daughter, Amanda, and marketed his work in his own gallery.

Doug’s paintings are on display at the Cactus Wren Gallery in Tubac, and in his home studio, as one of the favorite SaddleBrooke Ranch ARTwalk Artists.

Visit Doug’s website at www.dougmillerart.com to enjoy his wonderful work and obtain information on how to contact him.