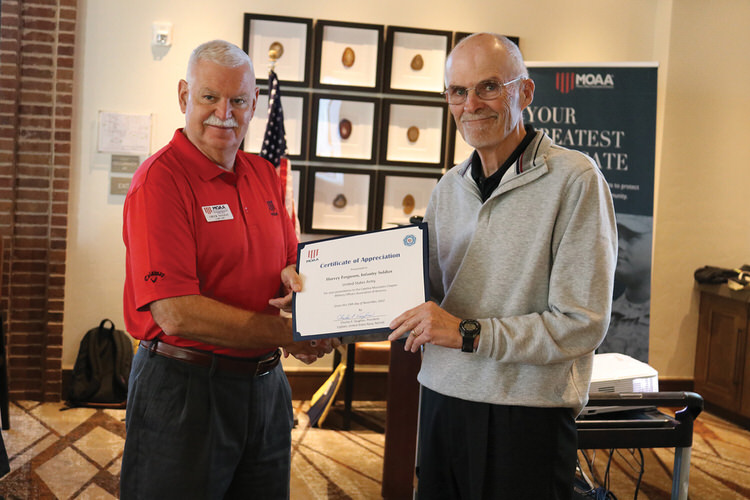 Capt. Vaughan presents a Certificate of Appreciation to Mr. Ferguson

The Catalina Mountains Chapter (CMC) of the Military Officers Association of America (MOAA) held its most recent meeting on Nov. 19 at SaddleBrooke Ranch. The meeting began with a business session presided over by retired Capt. Chuck Vaughan, U.S. Navy, President, during which members were updated on the chapter’s current and upcoming activities.

The presenter was Harvey Ferguson who served as an infantry soldier with the U.S. Army’s Third Infantry Division in Germany during the cold war period. The Third Infantry Division was one of the major deterrents against any thoughts of aggression by the U.S.S.R. After his military service, Mr. Ferguson used his G.I. Bill benefits to earn a bachelor’s degree and then began his 33-year career with the Seattle Police Department.

Mr. Ferguson’s PowerPoint presentation featured material from his 2015 biography of Gen. Lucian K. Truscott, Jr., U.S. Army titled The Last Cavalryman. He discussed Gen. Truscott’s life from his boyhood through the post WWI period, into his commands during the WWII, and then his involvement in the Central Intelligence Agency. Gen. Truscott had the rare distinction of commanding a division, a corps, and a field army in combat.

Harvey used maps and many photographs to explain the amphibious invasions led by Gen. Truscott and his 3rd Infantry Division, first on Sicily as part of the 7th Army in July, 1943; on Salerno as part of the 5th Army in September, 1943; and on Anzio as part of Army VI Corps in January, 1944. Gen. Truscott was principally involved in the continuing Italian Campaign throughout the balance of WWII.

The December luncheon meeting of the CMC was held at SaddleBrooke Ranch Grill on Dec. 17. The speaker was CMC member, retired Maj. Raymond Caryl, U.S. Army. He talked about his experience flying with the 220th Reconnaissance Airplane Company, the “Catkillers,” in support of U.S. Marine Corps operations in the Republic of Viet Nam. Maj. Caryl is also the author of the book An Army Pilot Flying for the Marines in the Vietnam War, published in 2019.

If you are a former or present officer of the uniformed services interested in joining our organization, please contact Membership Chair, former Lt. j.g. David Bull, U.S. Navy, by email at [email protected] or by telephone at 520-825-0604.

The membership of CMC encompasses the areas of Catalina, Oracle, parts of Oro Valley and Marana, SaddleBrooke, SaddleBrooke Ranch, and Sun City. For additional information, please visit our website at catalinamountainsmoaa.org.

The CMC and MOAA are nonprofit veterans’ organizations dedicated to maintaining a strong national defense and preserving the earned entitlements of members of the uniformed services and their families.