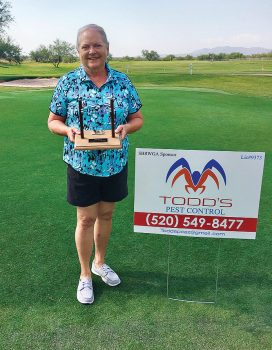 The SaddleBrooke Ranch Women’s Golf Association (SBRWGA) held its 2020 Telegraph Tournament on Aug. 25. This tournament began many years ago, prior to many organized sport associations, when most players were unable to travel to competitions. Local competitions were then held, and the results were sent via telegraph to the organizers to determine winners. Many Telegraph Tournaments were held in popular sports, like swimming and track, that were timed competitions.

Today our local Telegraph Golf Tournament is played at all Southern District Women’s Golf Association (SDWGA) clubs, and scores are emailed to SDWGA so winners can be honored on their website.

Congratulations to Linda Chonle for winning the 2020 Telegraph Tournament with a net score of 68! This year’s winner had to be decided by a scorecard playoff between three players (Linda Chonle, Lee Rinke, and Kay Johnson), all finishing with a net 68 score. The winner was decided using USGA tie breaking rules (best net score on the last 9 holes) with Linda Chonle scoring a net 31 on the last 9 holes, beating Lee Rinke’s net 32 and Kay Johnson’s net 34.

Linda was awarded the Telegraph Trophy to enjoy, until it gets passed on to next year’s winner!

Other winners were as follows: