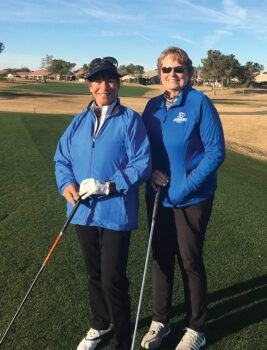 Jean Cheszek and Carol Mihal represented the SaddleBrooke Ranch Women’s Golf Association (SBRWGA) at the State Medallion Tournament. Jean and Carol earned the right to compete in the statewide tournament by winning the SBRWGA local qualifying tournaments held throughout the year. Jean won the medallion for the low gross score, and Carol won for the low net score. Both ladies received the prestigious AGA ball marker medallion for their accomplishments.

The Oakwood Golf Club in Sun Lakes, Ariz., hosted the three-day tournament to accommodate all qualifying golfers. Jean and Carol competed on Sunday, Jan. 16, in the second flight of the 224 player field. Although our ladies didn’t win the tournament, they enjoyed the day at the beautiful course.

The day concluded with a lovely luncheon and awards ceremony. First place was awarded to two players from Papago Golf Club in Phoenix. A special award was given to a 92-year-old player who has shot her age four times in the last four years! She was quite an inspiration to all the players. Even though Jean and Carol did not shoot their age, they are an inspiration to all of us here at the Ranch as well.