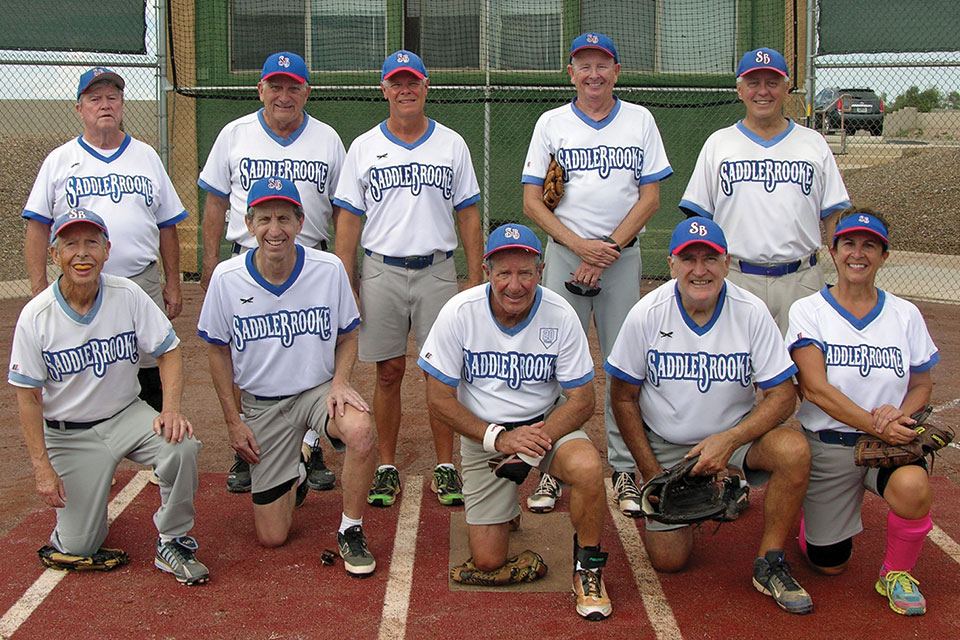 Q has been rounding the bases for 20 years of SB teams. Photo by Allan Kravitz

The long hot summer is over, and the SaddleBrooke Senior Softball Association (SSSA) is excited to announce the results of our summer leagues. Before we begin let’s take a moment to learn a bit of history about “20 years” of softball teams and one guy in particular.

Ron Quarantino, or “Q” as he’s known at the softball field, has been playing his favorite game most of his life. After moving here he played in downtown Tucson along with other SB players and continued for 13 years. In 1997 the SB guys formed their own teams, continuing to play on downtown fields. Q proudly wears a “20 years” patch on his jersey to celebrate his time with the SSSA. Brad Adair is another active player who qualifies for the 20 years honor.

When our field was completed in 2005 and the first game was played, Q was first up to bat and he hit the first pitch for a home run! He’s known as one of the fastest runners around the bases.

During the just completed summer season, Q played in every one of the five leagues offered including doubleheaders on some Mondays. He also participated in both the Competitive and Community Leagues on Friday…a total of five or six games each week. How about that for a 77 year old fellow!

This season Q served as manager for three teams including his Monday Community League team, The Charles Company, which won the championship. He was the top batter on his team with the highest slugging average. He was also the top hitter in the Thursday Coyote League.

For the last 12 years Q has volunteered as an umpire to officiate at games he’s not playing. He’s serving his second year as Commissioner for the Coyote League, and Q is also on the scorekeeping team.

Ron and wife Barb met as kids in their hometown of Kingston, New York; they’ve been married 56 years. Barb doesn’t mind that her husband spends all his time at the softball field. She says, “It’s his passion; he lives for it, plus it keeps him in great shape.”

Besides his busy schedule of games at our softball field, Ron also plays on a 75 plus majors traveling team along with his identical twin Bob. The team travels throughout the Southwest playing about five games a year. In 2015 and again in 2017 they won the World Championship, and each player received a championship ring.

In the Monday Community League, The Charles Company, led by Ron Quarantino, had a dominant season to win the championship with 9 wins, 5 losses, and 218 total runs scored this season. This was over 50 more runs than the second place team, W & W Physical Therapy with manager Steve Schneck and a record of 7 wins and 7 losses. Third place went to Tri-Community Lock & Safe with Jack Graef doing the line-ups finishing with 4 wins, 8 losses.

In Tuesday’s Competitive League, the Sunshine Experts/Sunesta/Solatube team managed by Larry Weber came out on top with 7 wins, only 4 losses. Second place went to Twin Lake Air led by Leonard Gann with 4 wins, and 7 losses. Only six runs scored separated these slugger teams.

On Thursday the Coyote League saw Mike Hamm’s players sponsored by Waste Management lead the way with 6 wins, 4 losses. Bank of the West landed in second place. Ron Quarantino was the skipper for this team, ending with 4 wins, 6 losses.

In the Friday Community League, first place went to Vantage West Credit Union. Ron Quarantino was the skipper here for the 6 wins and 4 losses record. Ken Beals managed The Villas Assisted Living to a second place finish of 4 wins and 6 losses.

Finally, the Friday Competitive League champs were Mark Hojnacki’s team sponsored by Webbscapes Landscaping with a final mark of 6 wins, 4 losses. Just behind with four fewer runs of total output on the season, Bob Chiarello led the players of X-Pert Automotive to 4 wins and 6 losses.