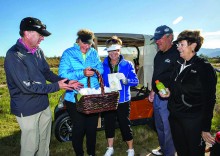 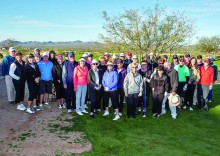 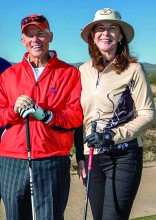 The SaddleBrooke Ranch Women’s Golf Association c hosted its second annual Sadie Hawkins Golf Tournament on Tuesday, November 10, 2015, with 20 golfers participating. The format was two-person best ball. The members invited a male resident (not their spouses) of the Ranch with a USGA handicap as their partner. The format was a two-person best ball.

The weather was not bad, a little chilly with the wind picking up part way into the tournament. A pleasant surprise for the golfers was extra large putting cups on several holes. Following the event golfers were treated to a wonderful lunch and presentation of awards and door prizes.

Special thank you to Jeanne Jensen for driving the hospitality cart and Steve Weiss for being our photographer.

The SBRWGA welcomes all ladies who want to play 18 holes of organized golf to join our league. If you are interested please check our website sbrwga.com or contact Jeanne Osterlund at 858-603-0424.